Always start with the first blank. Look at the blank and notice where it appears in the sentence. Ask yourself, what kind of information is missing from that sentence? Does the sentence need a person, place, an action, an event, etc.? You can also go by the grammatical rules and ask yourself it the sentence needs a noun, verb, etc.

Then look at the given options and shortlist the ones which might fit into that blank. If you are unable to shortlist any blank, it is suggested to move on the next one. Ones you have filled in other blanks, you will be left with fewer words in the pool. This will make it easier to identify the remaining blanks or even make an educated guess if you have to.

Keep your eye on the overall timer. Don’t spend too much time on one blank. And also do not spend more than 2 minutes on one question as a whole.

Read the passage again after you have filled in all your answers. This is to check whether the answers make sense and are logical with the rest of the passage.

1. Use grammar knowledge to rule out wrong options

Make sure that the whole sentence sounds grammatically correct when filling blanks. This can be done by taking into account words surrounding the blank and figuring out what part of speech is appropriate (e.g., preposition, conjunction, adjective, noun, adverb).

To be more specific, once you skim through the given passage, you can grammatically extrapolate what type of word is missing in the blank, whether it will be an adjective, adverb, noun, verb, prepositions, this can increase your chances of selecting the right word. For example, if you know a specific gap in a question needs a noun, it can increase your chance to select the right word by eliminating other types of options such as preposition, conjunction, adjective or adverb.

In the example below, ‘beginning to’ tells you that an infinitive verb form is missing ‘to + verb’. Next look at the answer options provided and rule out any words that are not the right part of speech, e.g., ‘world’ is a noun, ‘public’ is either a noun or adjective and ‘formal’ is an adjective. Also rule out any verbs that are not in the infinitive form, ‘prescribed’ and ‘serving’ are verbs but they are in the wrong forms.

Finally, choose from the words that are left, the one that has the correct meaning: ‘view’ and ‘look’ mean ‘see’, but we ‘quote’ or ‘cite’ references, so only ‘cite’ fits the blank: 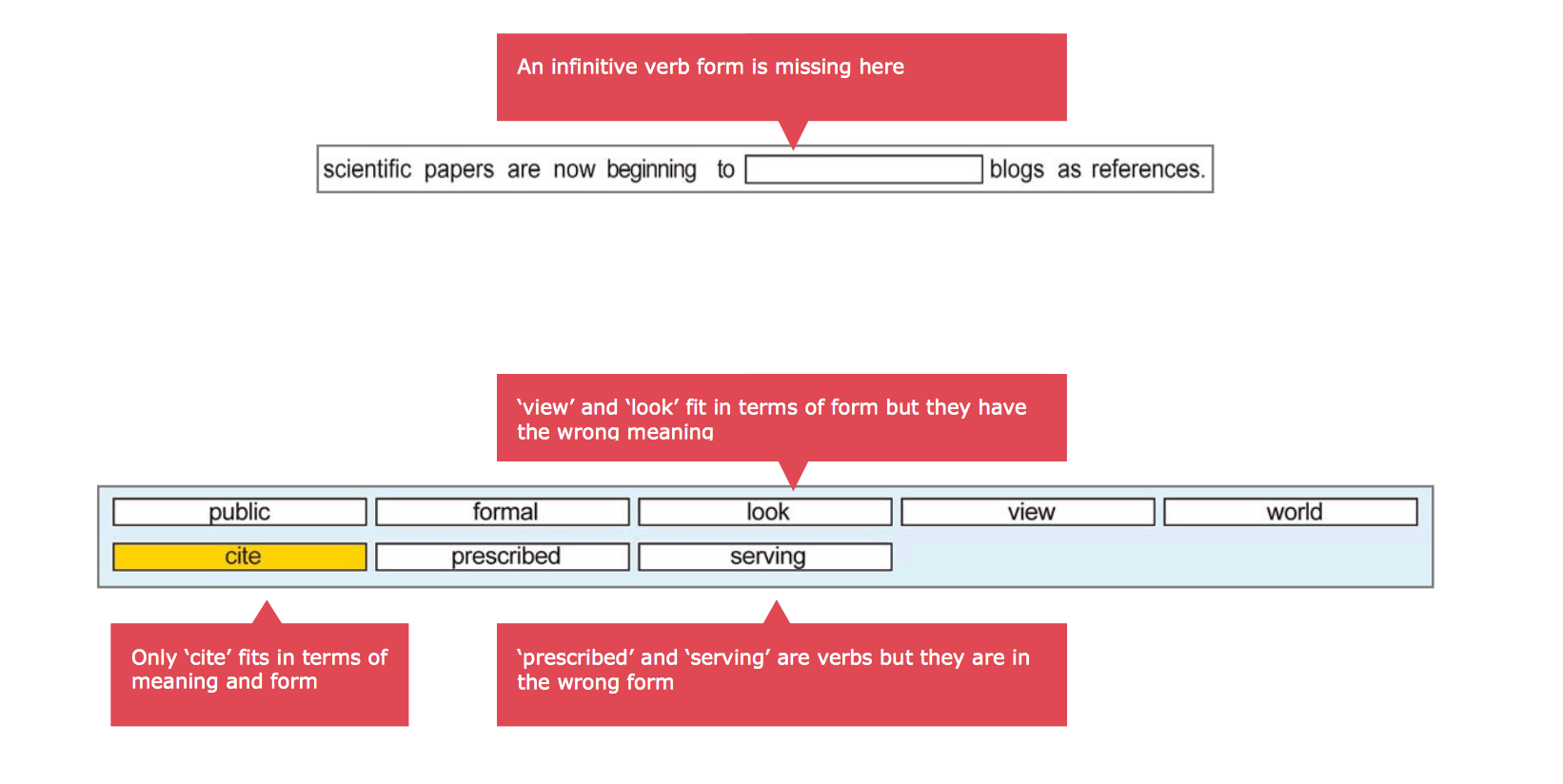 Learn to recognise suffixes for the different parts of speech, so in the exam even if you don’t know the meaning of the word, you can identify whether it is a verb or an adjective. For example: familiarize (verb suffix), familiarity (noun suffix) and familiar (adjective suffix).

Make sure you have an in-depth knowledge countable and uncountable nouns and know that if it’s a countable noun, it will need to have a/an/ the in front of it and can be in the plural form with an ‘s’ at the end.

But if it’s an uncountable noun, it cannot have a/ an in front of it (but it can have ‘the’) and will not have a plural form – so no ‘’s’’ unless it’s an exception, such as: news, or academic subjects, for example: politics, economics and therefore is always written in the plural form though it’s treated as a singular noun. Just as importantly, practice subject verb agreement- so if a singular noun/subject, you need to make sure the present tense verbs are also in singular form, whereas a plural subject takes a plural verb.

For the last blank, we know can eliminate the option ‘enigma’ as it has to have an before it, besides contextually it will not make any sense if we select ‘enigma’ or ‘mystery’, hence we should choose ‘reason’, ‘for a reason’ is a collocation.

As for the first blank, we have two options left which are ‘enigma’ and ‘mystery’, the difference between enigma and mystery is that enigma is something puzzling or inexplicable while mystery is something secret. By reading the surrounding context, we understand it is talking about something puzzling to human instead of a hidden secret, hence enigma is the right answer for the first blank.

In terms of the second blank, as we all know that adjective modifies noun (for example: a decent job), the blank needs an adjective, there are 2 options that are adjective – brilliant and exuberant. Because the adjective should agree with the article – An, hence we should choose the adjective that begin with vowel sound – exuberant.

The phrases links by “and” as well as “or” are most likely the same type of words, in below example, it can be clearly seen that the part of speech before and are gerund —- ‘researching’ and ‘structuring’, hence the type of word  in the blank should follow the same pattern; therefore, ‘understand’ and ‘abolish’ can be ruled out. Abolish means end an activity which doesn’t fit the context, so the answer should be understanding.

2. Do not spend more than 2 minutes on this task

Try to solve this question in around 1.5-2 minutes. Avoid spending more time than that. To increase your speed and reading comprehension ability, we suggest our students to read every day, this is to help you get comfortable reading fast and be able to quickly take in the information. We list a few websites below, where you can go through news and articles on a daily basis, this will also greatly develop your reading speed and comprehension both.

There are a wide range of topics in PTE Reading Fill In The Blanks section, including science, business, biology and literature etc. Now, it might happen that you come across many words that you are unfamiliar with.

Hence, develop a broad vocabulary by reading widely on academic topics is necessary. Read and engage with academic articles as much as possible every day to expand your vocabulary. You can check unknown words in the dictionary and create your own mini vocabulary lists with the meaning for this word and a sample sentence of how it is used, this is very important so that you can remember them contextually.

4. Use “Collocation” to identify correct words

In PTE Fill in the blanks – Drag and Drop, remember that some words often go together to form a familiar phrase. This is called COLLOCATION. Using collocation can help you recognise the correct word for each blank. For example, the phrase ‘grains of sand’ is a common collocation, so you can quickly see that ‘grains’ is a good choice for the blank in the sentence below:

Also, become acutely aware of which prepositions are used after common adjectives, nouns and verbs. For example: associate with…; relate to…; an increase/decrease in….; be concerned about….; be concerned with…; be blamed for….; in spite of…. The most common collocation lists are provided in the study pack, you need to read them through and get familiar with those collocation as much as you can.

These tips and strategies will definitely help you achieve a good score in this task. And yet again, we would like to remind that it takes practice for a better performance. Find some time in a day where you can practice with the PTE Reading Real Exam Questions, by doing so your overall PTE score will improve greatly!

There are always some blanks which are easier than the others. Instead of getting stuck at a difficult blank, move on the next and try to fill in all the ones which you find easy. This has two advantages. First of all, you are assured of some marks. Second, this will reduce the number of options remaining, making it easier to fill the other blanks.

PTE Fill in the blanks – Drag and drop Questions

Try it yourself
Go to Top